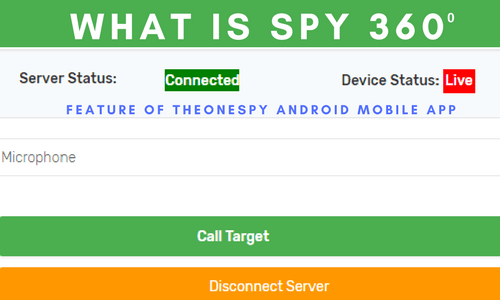 TheOnepy Android mobile app is one the leading monitoring software that enables a user to track the activities happen on the target android cell phone device. It has come up with its new feature known as spy 360. The new feature of TOS Android spy app is based on three sub features that are capable of tracking the target device in three different ways.

The old and traditional methods of surveillance are very tricky, but when it comes to spy 360, its interface is user-friendly and user don’t have to deliver back to back commands on the target smartphone. The user can connect the mobile phone device with MIC, rear and front camera abruptly, accurately and precisely. On another hand, it provides a user live surveillance of a target phone with the help of back and front camera of the device.

It has the power to monitor target android phone device 360 degree and further allows user listen to the live surrounding sounds and voices, live screen sharing and a user will be able to see live visuals by using the TOS spy 360. Furthermore, a user will be able to listen to the voices, live visuals of the surroundings with 0.00 delays. It has the power to provide user real-time monitoring statistics. The user doesn’t require rooting the target phone and it has state of the art viewable player. Let’s take a look at TOS Spy 360 sub features.

Spy 360 enables a user to listen to the surrounding sounds, with the help of spy 360 live surrounds listening, live surround visuals of the target phone through 360 live camera streaming and sharing the screen of the target Android mobile phone by using the live screen sharing.

If anyone wants to use it, then subscribe at TOS, resultantly you will get all the credentials at your email address. Now you just need to use these given credentials and login into the TheOneSpy online web portal. You will get a key to the particular subscription plan. Use this given key into the dashboard and get access to the TOS spy 360. It is the time to make a click on it and you will have all the three state of the art features such as spy 360 live surround listening, TOS spy 360 live camera streaming and spy 360 live screens sharing respectively. If you use spy 360 liven surround listening, it will connect you to the target phone and you will able to listen live surround voices and conversations. Using spy 360 live camera streaming, it will connect you to the rear and front camera of the target android phone and you will see live real-time visuals of target phone surroundings. The last but not the least is to use of spy 360 screen sharing connects you to the screen of target android mobile phone and screen will be broadcast live into the TOS spy 360 app control panel with real-time.

Worried parents who want to know about their kids and teens, and get to know their hidden activities. They should use TOS spy 360 teen protection. They will be enabled to listen to the surrounds voices by hacking the MIC, enable to visualize in real-time of surrounds of the target phone and also have the power to do live screen sharing of target Android smartphone to know what is happening on the device screen.

Employers can keep an eye on their employee’s activities by using the TOS spy 360. They can remotely listen to the surround conversation with the help of live surround listening getting access of the target phone MIC, get the live visuals by connecting with the front and back camera of the android target phone device and even can share real-time screen sharing of target mobile phone on spy 360 online dashboards.

Suspicious spouses can get their hands on their partner’s hidden activities and can judge their loyalty. TOS spy 360 software enable spouses to know what really is going on behind the scenes. They just need to use the spy 360 live surround listening, it enables spouses to listen surround voices and conversations of target phone, they can use spy 360 live camera streaming and can get the real-time visuals of partner by using the target phone front and back camera and can get the activities of target android phone bt getting access to the target phone screen and also can broadcast these live screen activities on the online spy 360 control panel.

Use TOS Spy 360 app and get to know live activities visuals, live surroundings conversations and voices and get live screen streaming of target phone within the dashboard of a TheOneSpy android Mobile app.

What Should You Use to Market Your Business Online?

Why The YouTube Video Marketing Is The Top Business Trend

Tips For Getting Through Addiction